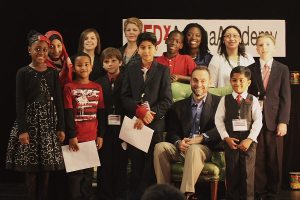 You’ve no doubt heard of TED and probably TEDx, but many people are not aware that TED also hosts TEDxYouthDay. TEDxYouthDay is a series of worldwide TEDx events that coincide with Universal Children’s Day in November. TEDxYouthDay events are designed to inspire, empower, and engage young people by igniting new ideas and giving the next generation of leaders an opportunity to speak and be heard.

This year’s theme was Dream Big…Then Do It, a theme played out at TEDxAmanaAcademy, the TEDxYouthDay event hosted by the school where I am the Elementary Grades Director and the brainchild of one of our talented, innovative teachers, Maria Annunziata. Maria’s idea was to connect the TEDxAmanaAcademy talks to the Expeditionary Learning Design Principles which are a foundation of Amana Academy. I was, frankly,  blown away and humbled by the amazing students whose passion for their topics came through with each presentation.

Parent volunteers helped to make the event happen, among them the talented Monique Russell-Messavussu of CLEAR Communication Solutions LLC. I asked Monique to reflect on her experience as an organizer, as a parent, and as a member of the Amana Academy community:

“I am so impressed at the success of this past Saturday’s TEDxAmanaAcademy event. It gave me great pride to see the young men and women come together to share their ideas and be supported by their parents, school, community and friends. The students came up with their creative ideas all by themselves, and were interested, and passionate in communicating them.

As a co-organizer over the past 8 weeks, it has been a joy watching the young men and women grow in their critical thinking thought processes as they developed their talks. They also grew in confidence while receiving honest feedback from their peers. The peer evaluations not only gave the presenters a chance to justify their positions, but it empowered the reviewers to identify, and constructively share areas of improvement.

At the beginning of this process, I was nervous about the short time frame we had to prepare, but working alongside such a dedicated and professional teacher as Ms. Maria Annunziata some of my fears were held at bay. Ms. Annunziata made herself available three times per week for 90 minutes to help students brainstorm, develop, and practice their talk. I especially enjoyed the activities before each Tedx Thursday, which I considered a mental gymnastic exercise that involved thinking about technology, or relating to the Expeditionary Learning design principles. For example, one activity involved having students gather in a circle where each individual would mime an object they could think of that related to technology. The person to the right of the mime would try to guess the answer, and then receive the object to develop their own. Students as young as first grade thought up things like fans, helmets, televisions and more. It got them thinking about the way technology has evolved, and prepared their big minds for even more creative work. Whoever said that creativity is being stifled would disagree in this environment. The level of engagement, and excitement blew me away.

When we selected the final speakers for the event, working with them was a joy. I loved pulling out what they had inside of them rather than providing them with answers, or clouding their thoughts with an adult, realistic point of view. I would often ask them why they thought of a certain topic, and I challenged them on their stance. I pushed them to think outside their limits—and what was most surprising was that they had answers—and ones they were confident in!

The day before the event, a bit of nervousness set in. I was concerned about the delivery of some talks since the practice time was limited. What I saw on the day of the event amazed me. I saw how literally overnight…having parents encourage repeated practices improved the delivery, and familiarity of their talks.

In retrospect, the lessons learned would be to get more parent support earlier in the process with research, brainstorming and definitely practice. In addition, developing a budget, and testing technological pieces ahead of time will make the next event even better. Because it was the first event, logistics and technology were a concern; however, I am happy to say that there were no major glitches or obstacles, and everything ran seamlessly. Throughout this process, I realized the importance of having a strong team, and committed volunteers.

Overall, the experience reminded me that no matter how young, students all have innate passions, and ideas really worth sharing.”

Videos of the students talks will post soon. In the meantime, check out the great pics on Flickr http://www.flickr.com/search/?w=all&q=tedxamanaacademy&m=tags and be inspired!

Thoughts on innovation and leadership in education